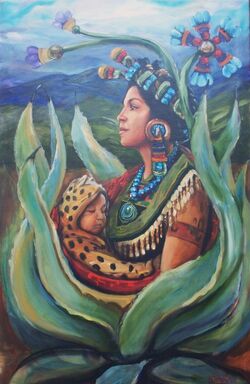 Mayahuel is the female divinity associated with the maguey plant (agave) among cultures of central Mexico in the Postclassic era of pre-Columbian Mesoamerican chronology, and in particular of the Aztec cultures. As the personification of the maguey plant, Mayahuel was also part of a complex of interrelated maternal and fertility goddesses in Aztec mythology and is also connected with notions of fecundity and nourishment. She was also the goddess of alcohol as the Aztecs made the drink, pulque out of the agave.

Children of Mayahuel reside in Barrack G along with children of Chicomecoatl.

Retrieved from "https://campaztecroleplaying.fandom.com/wiki/Mayahuel?oldid=6182"
Community content is available under CC-BY-SA unless otherwise noted.